Together with Stefan I found solid rock boulders at the Baltic coast: Kerteminde Marl. Freezing cracked them and dozens of foraminifera peeled out. ... see more

A new set of specimens from Jurassic glacial erratics found in gravel pits north of Berlin are provided by Steffen Schneider. We enlarge the photographing and identification. ... see more

It tells about our foram activities, your contributions and plans for 2021. The PDF has ten pages and is full of illustrations. If you want to get it: Subscribe with your email-address

Foraminifera, or forams for short, are single-celled organisms that live in the open ocean, along the coasts and in estuaries. They consist of cytoplasma, which is stabilized and protected by an inner shell called test. Either they float in the water column (planktonics) or live on the sea floor (benthics). Of the approximately 6,000 species living today, only about 50 species are planktonic. It is estimated that there are about 80.000 species, which went extinct.

The word is derived from the Latin words for opening "foramen" and to bear "ferre". So literaly foraminifera means opening bearing. Usually they have one major opening called aperture and miniature smaller ones. Some have secondary apertures. While openings are a mutual feature of all foraminifera, they play in taxonomy only a minor role. ...      more on apertures

Where do Foraminifera live ?

Foraminifera are abundant all over the oceans. A few species live in freshwater environments. Forams live in the deep sea, open waters, near shore and even in areas only partly covered by sea water. Each niche has a specific mixture of species, called fauna. Explore the foraminifera in todays oceans via the zoomable map of our finds or the database-query choosing an ocean, area and/or locality.

They live on the seafloor and adapt to the local habitat. Major factors of such seafloor habitats are food supply, light, predators, water-depth, salinity, temperature and substrate. In the fossil record an assemblage of benthic foraminifera may lead to an understanding of the ancient habitat. Benthic foraminiferal species show a wide range of life styles and forms. ... to the images

They drift in the oceans. Their habitat are open waters from the surface to several hundred meters below. About 50 species live in todays oceans. Wide areas of the ocean floors are covered by their remains, the so called tests. They are used for palaeontological and stratigraphical studies (PDF) by Prof. Kucera.... to the images 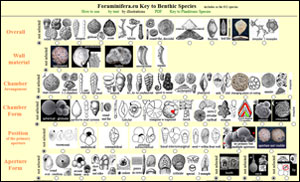 As single celled organisms with a nucleus, foraminifera belong to the kingdom of protists. They build an own phylum with 80.000 described species. The taxonomy is for more than 99% of the species based on the morphology of the test. The wall material of the test and the chamber arrangement are the most important features to describe benthic species. Consult our key to benthic species. For planktonics the test surface and chamber arrangement are important. Consult our key to planktonic species. Read more. 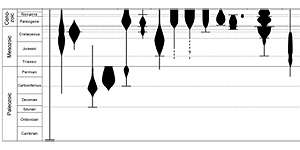 The stratigraphic range of foraminifera extends from before the Cambrian till today. The first species had organic tests or were simple agglutinated tubes. In the Paleozoic Fusulinida dominated. In the Mesozoic an enormeous radiation of species took place till substantial extinctions at the end of the Cretaceous. The Cenozoic had a huge radiation. In total 80.000 species are described and used in the biostratigraphic studies. ...to the fossil record

The Foraminifera.eu Project (FEUPRO) is run by a team of avocational scientists, who gets great support by professionals and amateurs. We want to foster the interest in foraminifera as an important but mainly neglected form of life. Our freely accessible database is a major outcome. We work out of natural enthusiasm on a strictly non-commercial basis. ... read more 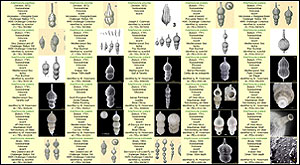 FEUDAT contains to date 16.600+ datasets each with an image and 30 + attached data. The data allow to search for foraminifera on a wide range of criteria, which are on taxonomy, morphology, geography, geological time, collection, fauna and more. The result is presented as a plate with up to 500 images. FEUDAT is freely accessible. Contributors may find their collection of foraminifera better accessible than ever. ... to the database 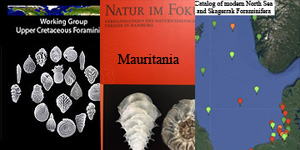 Whenever contributors and we decide to work longer on a specific topic a project is established. In 2009 it started with the database. It is now part of our daily work. Then in 2010 we established the project "Sternberger Gestein". The Working group of Upper Cretaceous foraminifera is continuosly enlarging its catalog. Further projects are built on forams from Portugal and in glacial erratics.

A major outcome of the Foraminifera.eu Project is a catalogue with to date 16.500+ entries. It is mainly achieved by projects and focussed work on specific foraminifera. One of the goals of these specific studies is to build catalogues of the according foraminifera. Whenever a representative amount of species are documented a catalogue is established. The catalogues are described below.

The Working group of Upper Cretaceous foraminifera has created over time a catalogue of 2500+ Upper Cretaceous Foraminifera. It started with own finds from Upper Campanian quarries near Hamburg and was soon substantially enlarged by contributions of images by professionals. The enlargement is ongoing and your contribution is welcome to enlarge the coverage. ... to the catalogue

We work strictly non commercial, money can"t be contributed. Raw material and picked specimens allow us to work on interesting stuff und explore new topics. With Images we may enlarge the coverage of the database. Comments and proposals often lead to improvements. Invitation to talks, field work and workshops allows us to get in touch with interested people. Provided publications preferably as PDF help us to improve our skills. Contact us 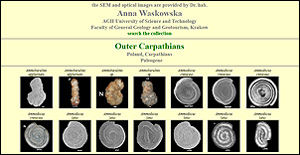 As a contributor you will get your own contributors page. It is freely online accessible to you and everyone interested. You will find your collection in our well structured database and thus made accessible over a substantial range of criteria. We add contributed images free of charge and check identifications. To a limited extent and willingness of the team we process raw material, extract forams, shoot optical images and identify specimens. ... to the list of contributors

Foraminifera should be properly stored in microslides. There are different types and manufacturers, the ones we use are described here